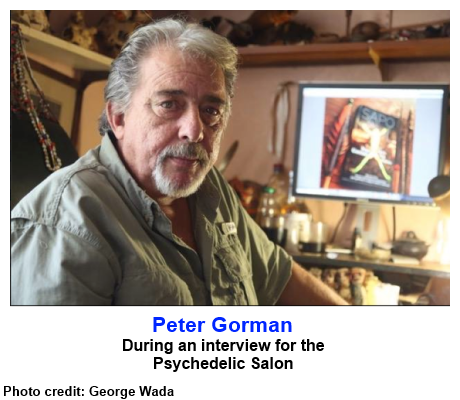 “Today’s podcast features an interview of Peter Groman by Tom Huckabee. The interview took place at Peter’s home in August 2015. In this, the first part of Peter’s story, we learn that Peter was one of the first American’s to take ayahuasca. At the time, Burroughs’ “Yage Letters” hadn’t yet made it around to him. He wrote a freelance story about the experience, which became a front page story in High Times Magazine. Many twists and turns later, Peter became the Editor in Chief of High Times and was instramental in entering the discussion of medical marijuana into the mainstream media. This is the first part of this interview, and it ends with Peter and his wife deep in the Amazon and being acosted by river pirates.”

“I have never gone to bed in Peru without having learned something new that day.” -Peter Gorman

“Today’s podcast features the second part of an interview with Peter Gorman, one of the larger-than-life figures to be found among our psychedelic elders. The program begins by picking up with a story about river pirates in the Amazon, migrates to tales of running a bar in the jungle town of Iquitos, Peru that was frequented by DEA agents, and continues with Peter talking about his interactions with luminaries such as Albert Hofmann, Alan Ginsberg, Ken Kesey, Timothy Leary, and Terence McKenna. Also, Peter talks about his new book “Sapo In My Soul”, which is the first book to be published about this interesting medicine. Of interest to our younger saloners will be his telling of how, as a young man himself, he financed his trips to the Amazon and the methods he used to search for medicinal plants in the jungle.”

In A Perfect World podcast #99 – Gorman on my Mind

Join Peter Gorman, award-winning investigative journalist and author of Ayahuasca in My Blood and Sapo in My Soul, as he talks with Rak Razam about indigenous ‘ordeal medicines’ and the rise of shamanism in the West. Gorman first drank ayahuasca in 1984 and is one of the first modern wave of intrepid explorer-adventurers to document this medicine. He also introduced sapo, the secretion of the Phyllomedusa bicolor frog used by the Matses, to popular attention. What is the role of these substances in the wild, and how are they being used as the West absorbs the shamanic medicines? How can the sustainability of the vine and the frog be ensured, and how can commerciality be balanced with spirituality? A robust, provocative discussion on the state of the Western shamanic community and its impact on indigenous cultures, with Gorman and Razam.

From the Gorman Archives: Peter interviews the Elders

Join the Ayahuasca In My Blood facebook group to discuss sapo, ayahuasca and chat & chill with Peter G and friends.